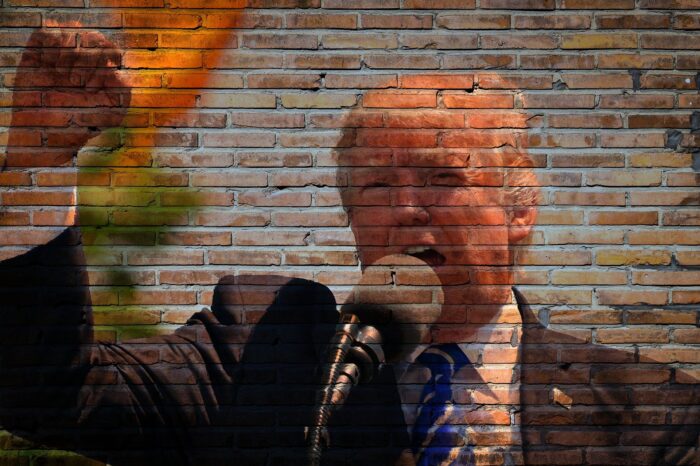 It may sound dumb, but a new scientific analysis reveals the President’s speech style is smarter than it seems

‘I felt great. Like better than I have in a long time…better than 20 years’ ago.’ he said on release from Walter Reed hospital. ‘

It suggests his idiolect is utterly different from that of other politicians and from previous presidents of the US. The authors scrutinise exactly how he uses nicknames, the definite article, conceptual metaphors and strategies such as othering his opponents – hence ‘wicked Hillary‘ or ‘sleepy Joe’.

Indeed, it seems Donald Trump’s language is not as dumb as it seems.

Pic credit: Image above of President Trump projected on a brick wall by Pete Linforth at Pixabay

One of the first observations linguists make about Trump is that he sounds more like your uncle or neighbour talking than a president.

John McWhorter, a professor at Columbia University told the MSNBC news channel that Trump ‘is your Uncle, sitting by the pool with a beer, that beer is likely a Budweiser and he’s just running his mouth in a colourful way and enjoying the attention of his little nieces and the teenager from next door.’

Jennifer Sclafani suggests that we are not used to hearing Presidents speak like everyone else.Trump jumps from topic to topic frequently – just like everyday speakers do.

He achieves this by using simple language in a lower register. Indeed, one study shows that he speaks at the level of an eight-year-old.

He uses simple grammar and vocabulary and close analysis of all his speeches reveals he barely even uses words with more than a couple of syllables.

The research put his language through eight vocabulary tests to check for complexity and comprehension level. Trump scored lower than previous Presidents and averages significantly fewer syllables per word.

In her analysis of Trump’s language for Medium, Tiffany Markman suggests that the President often uses fragmented sentences. She uses this example…

“And in 19 — and I will tell you this, and I said it very strongly, years ago, I said — and I love the military, and I want to have the strongest military that we’ve ever had, and we need it more now than ever.”

She writes: ‘All language use contributes to a persona – we continually reinvent ourselves as we write and speak – and Trump’s persona is, arguably, carefully crafted as the antithesis of the conventional politician.

The language of sales

The biggest influence on Trump’s language has been his experience as a deal maker, according to language expert and behavioural psychologist Dr Peter Collett. In addition, he has been a reality-tv star and this has also shaped the way he speaks.

His default mode of engagement is selling. That’s what Trump does – his whole life has been about deals. Dr Collett says the first rule of sales is to identify your target market and the needs of your customers – and this is something Trump does well.

He plays to his target market, disgruntled conservatives, with every sentence and his tone of speech. He sets out what the problem is and convinces them that he is the only man that can solve it.

He also singles out his rival’s weaknesses ‘sleepy Joe again’ and makes himself seem the only realistic option.

He uses ‘power talk’ says Dr Collett [‘I am going to be the greatest jobs President that God ever created’ Trump once said.]

Trump uses the technique known as ‘othering’ to distance himself from opponents or groups of people his supporters dislike. He uses nicknames and even the definite article – hence we hear ‘The Hispanics’.

He also employs hyperbole – and this is one of his most notable language traits. We frequently hear ‘best, better, great, greatest, specatacular’ and, of course ‘tremendous’.

Then, when Trump wants to make a point, he makes it multiple times. But why? Is there “method in what others may portray as his madness” (Inzaurralde, 2017)?

When Trump was discharged from Walter Reed medical centre he gave a bizarre speech which contained so many of the language traits we’ve come to expect from him. Most notable is just how many intensifiers he uses (best, great, better, greatest). Here’s my transcript and a link to a full transcript published online.

I just left WR medical centre and it’s really something very special. The doctors, the nurses the first responders – and I learned so much about coronavirus and one thing that’s for certain don’t let it dominate you, don’t be afraid of it you’re going to beat it. We have the best medical equipment, we have the best medicines, all developed recently and you’re going to beat it. I went, I didn’t feel so good and two days ago, I could have left two days ago, two days ago I felt great, like better than I have in a long time. I said just recently better than 20 years ago. Don’t let it dominate. Don’t let it take over your lives. Don’t let that happen. We have the greatest country in the world. We’re going back. We’re going back to work. We’re going to be out front. As your leader I hadda do that. I knew there was danger to it. But I hadda do it. I stood out front. I led. Nobody that’s a leader, would not do what I did and I know there’s a risk, there’s a danger but that’s ok and now I’m better. Maybe I’m immune, I dunno. But don’t let it dominate your lives. Get out there. Be careful. We have the best medicines in the world and they’re all happened very shortly and they’re all getting approved and the vaccines are coming momentarily (north American means ‘very soon’). Thank you very much and WR what a group of people. Thank you very much. [5 October 2020]

I would argue, that once you understand a little more about how Trump is using language, it makes his often crazy speeches a little easier to bear.

Instead, of shaking your head in despair at how unstatesmanlike he seems, you suddenly realise he has harnessed language to win the deal of becoming President.

Donald Trump’s speech is littered with religious references. When recovering from Covid-19 he suggested treatments looked like ‘miracles coming down from God’.

Laura Hood, politics editor at The Conversation, has analysed his use of religious language and suggests he uses it more frequently than any other president in the past century. It is part of his strategy to appeal to the religious conservatives and white evangelicals who helped place him in power in 2016.

While his ratings fall, the white evangelicals still approve of him for the most part and his strategy has been to continue to appeal to them – albeit in ways that can seem crass.

This strategy was evident when he cleared Black Lives Matter protesters to hold a bible aloft or went to an evangelical blessing during his 2020 campaign.

Sadly, I don’t have the copyright to post that incredible picture of him at a blessing this Autumn but google ‘trump at blessing las vegas’ and you’ll see the image of his face with a beatific smile that I just can’t get out of my mind. Or see it here in The Independent.